(WASHINGTON, D.C.) – Mayor Vincent C. Gray signed the Sustainable DC Act of 2012 into law today in preparation for the release of his full sustainability plan, Sustainable DC, in February. The law, first submitted to the D.C. Council in April 2012, helps move the District further towards the Mayor’s Sustainable DC goal of becoming the greenest, healthiest, most livable city in the United States.

The Council adopted all nine of the legislation’s proposals. Two proposals became law as part of the Fiscal Year 2013 Budget Support Act of 2012, which went into effect last year, and the remaining seven were signed into law today.

“As we finalize the District’s 20-year Sustainable DC plan, this legislation puts the legal framework in place to begin work on several areas of the plan immediately,” Mayor Gray said. “Together with the $4.5 million funding I made available in December as part of our Sustainable DC budget challenge to implement innovative sustainability projects across the city, we are closer to my goal of making the District of Columbia a model city for sustainability in the nation.”

The “Renewable Energy Incentive Program Amendment Act of 2012” allows DDOE to provide rebates to District residents and businesses for the installation of renewable-energy-generating systems in the District.

The “Clean and Affordable Energy Benchmarking Amendment Act of 2012” allows funding for the building benchmarking program required by the Clean and Affordable Energy Act (CAEA) being implemented by DDOE. This program, one of the first of its type in the nation, will require disclosure of ENERGY STAR Portfolio Manager scores for all private buildings over 50,000 square feet.

The “Anacostia River Clean Up and Protection Fertilizer Amendment Act of 2012” establishes buffer zones around streams and rivers to reduce fertilizer pollution in the District’s waterways that damages aquatic ecosystems, fisheries and water quality.

The “Sustainable Urban Agriculture Apiculture Act of 2012” promotes the raising of honeybees, which are beneficial to vegetable and fruit production in the District and production of honey for home or business use.

The “Child-occupied Facility Healthy Air Amendment Act of 2012” prohibits the location of child-occupied facilities near dry-cleaning facilities that use perchloroethlyene or n-propyl bromide as a cleaning agent for clothes or other fabrics.

The two provisions of the proposed Sustainable DC Act that were passed by the D.C. Council in July 2012 extended programs to fund weatherization and energy-system retrofits for low-income and elderly households across the city. 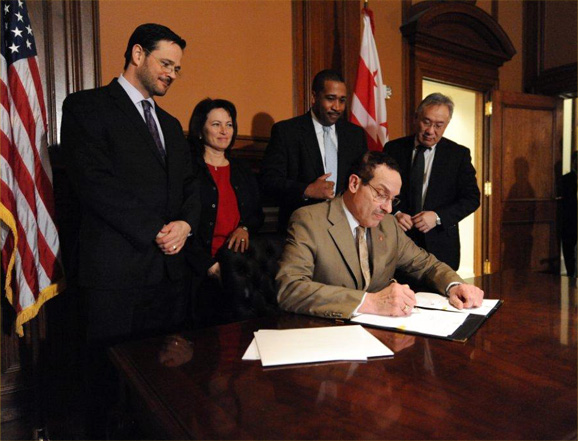