WASHINGTON, DC – March 25, 2015 — This  morning, the US Environmental Protection Agency (EPA) released its 2015 list of US metropolitan areas with the most ENERGY STAR certified buildings and the District of Columbia ranked number one, knocking Los Angeles, CA, out of the top spot for the first time since the program began in 2009. This achievement confirms the District’s commitment to providing building owners and managers with the technical guidance, best practices, and training they need to make their buildings more energy efficient, save money and cut pollution.

"The District of Columbia is proud to be a national leader in energy efficiency and honored to rank highest on EPA’s 2015 Top Cities list,” said Mayor Bowser. "Investing in our green economy is good for our environment and good for business. We are fully committed to working with our local business leaders to lower energy costs, reduce our carbon footprint and employ residents with good-paying jobs in this rapidly expanding sector.”

Cities are ranked on the list according to how many buildings in their metropolitan area achieved ENERGY STAR certification in 2014. To qualify for ENERGY STAR certification, a building must “perform in the top 25 percent of similar buildings nationwide. The Washington, DC, metropolitan area had 480 buildings earn ENERGY STAR in 2014, surpassing any other city in the nation. Buildings account for 75% of all greenhouse gas emissions from the District of Columbia which makes this ranking even more significant. The District of Columbia also leads all cities in the US in the total number of LEED certified projects—another high performance building certification program.

“This achievement is the result of strategic investments made by private sector owners, and both the federal and local governments, to reduce energy usage in the built environment,” says Richard Bradley, Executive Director of the DowntownDC Business Improvement District. “And even deeper value will be found in those investments, through the additional focus on changing occupant behaviors within buildings, which is part of the programs of the recently launched Smarter DC Challenge.”

The District was the first jurisdiction in the country to pass a law requiring large private buildings to annually measure and report their energy and water performance for public disclosure. This measurement, or “benchmarking” exercise, is done using the EPA ENERGY STAR Portfolio Manager tool. The 2014 ENERGY STAR data for buildings 50,000 gross square feet and larger are due on April 1, 2015. During the past few years, the District has seen a massive increase in ENERGY STAR certified buildings as a result of the District’s benchmarking law, Federal Government leasing requirements, and private market pressure for more efficient buildings.

“Washington, DC’s ranking shows how America’s cities are leading the nation in cutting carbon emissions and fighting climate change,” said Jean Lupinacci, chief of the ENERGY STAR Commercial & Industrial program. “By embracing energy efficiency as a simple and effective pathway to reach their sustainability goals, these cities are demonstrating the tangible benefits that result from simple, cost-effective reductions in energy use.” 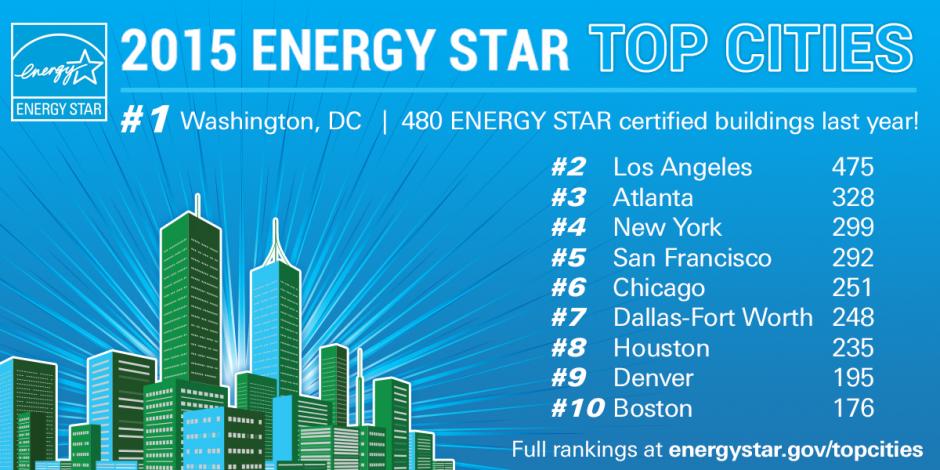 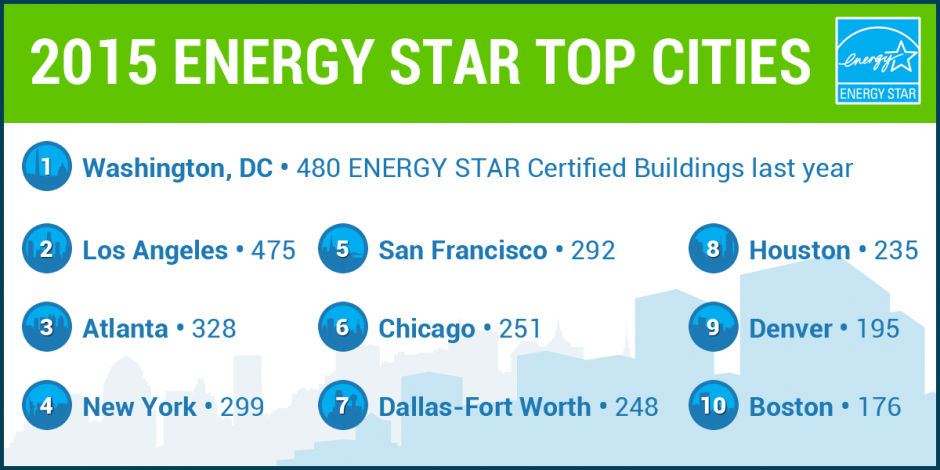