Purpose and Impact of the Bag Law

Purpose of the Law

The District’s Anacostia River Clean Up and Protection Act of 2009 – commonly known as the “bag law” – took effect on September 23rd, 2009 and the associated fees for bag usage began on January 1st, 2010. The law, which is the first of its kind in the nation, requires District businesses that sell food or alcohol to charge a $0.05 fee for each paper and plastic bag distributed with any purchase, with certain exemptions. The primary goal of the bag law is to change consumer behavior by discouraging use of disposable bags, thereby reducing trash pollution in the District’s waterways. 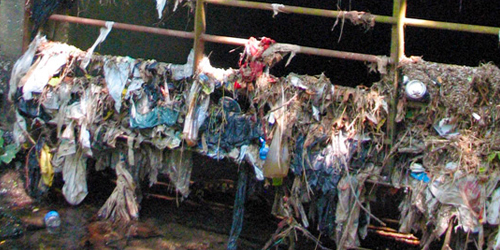 Bag fee revenue is deposited into the Anacostia River Clean Up and Protection Fund, a special-purpose fund managed by DOEE. The sole purpose of the fund is to support watershed protection initiatives, including education programs, stream restoration efforts, trash capture projects, and community outreach including the distribution of reusable bags. District residents can support the fund by making a voluntary contribution to the fund on their income tax return or by registering for an Anacostia River commemorative license plate.

Impact of the Law

The Alice Ferguson Foundation, which monitors trash in District waterways, reports a 72% reduction in the number of bags found during its stream clean-up events. Substantial reductions of plastic bags have improved water quality and wildlife habitat of the Anacostia River, restoring it as a cultural and economic resource for District residents.

Key findings from the 2013 survey include: