The purpose of these two restoration projects is to demonstrate the effectiveness of regenerative stormwater conveyances by installing a series of them along Oregon Avenue in Northwest D.C.  A regenerative stormwater conveyance (RSC), also known as a coastal plain outfall, is a specialized type of low impact development technique that uses stream restoration techniques to create a dependable open channel conveyance with pools and riffle-weir grade controls to create a system of physical features, chemical processes, and biological mechanisms that greatly reduce erosive forces and positively impact the ecology of a drainage area. The RSC installations will reduce erosion and decrease pollutants reaching Rock Creek by slowing down and infiltrating stormwater runoff from Oregon Avenue.

These projects are a unique partnership between the District and the National Park Service (NPS) to control stormwater from District lands while restoring intermittent streams on NPS land.  It is hoped that DDOT and DC Water will adopt these techniques in future roadway and storm sewer upgrades that are adjacent to or drain onto NPS land or open space. 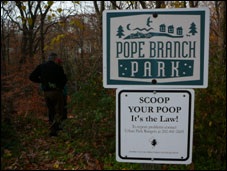 Pope Branch Regenerative Stormwater Conveyances:
At three different locations DDOE installed regenerative stormwater conveyances to help catch and filter stormwater run-off from the streets that drain into the Pope Branch tributary of the Anacostia River. A regenerative stormwater conveyance (RSC), also known as a coastal plain outfall, is a specialized type of low impact development technique that uses stream restoration techniques to create a dependable open channel conveyance with pools and riffle-weir grade controls to create a system of physical features, chemical processes, and biological mechanisms that greatly reduce erosive forces and positively impact the ecology of a drainage area.  The RSC installations will reduce erosion and decrease pollutants reaching Pope Branch and the Anacostia River by slowing down and infiltrating stormwater runoff from streets along Pope Branch.This project was implemented using American Recovery and Reinvestment Act (ARRA) funding and was a partnership between DDOE and the District Department of Parks and Recreation (DPR). 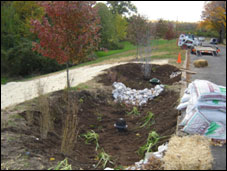 Two large LID retrofits on M Place in Southeast DC treat stormwater runoff from the street prior to it entering nearby Pope Branch.

The District Department of the Environment, the U.S. Fish and Wildlife Service and the Natural Resources Conservation Service of USDA completed a restoration project for the Watts Branch tributary of the Anacostia River in Washington, DC from Southern Avenue to Minnesota Ave. NE. The stream restoration project used Natural Channel Stream Design (NCD) practices over a 1.7 mile stretch of stream on District property. Through the natural channel design method a series of in-stream structures were installed (cross vanes, j-hooks, and vane arms) to keep the high velocity flows in the center of the stream channel thus minimizing erosive forces on the stream banks. NCD also creates a series of pools and riffles that both create areas for fish habitat and offer grade control on the stream. In addition to the in-stream work the project also entailed the creation of bankfull benches for energy dissipation during high flow events further reducing bank erosion. The final component of the project was to plant thousands of trees and shrubs along the stream corridor to increase the riparian area along the stream. 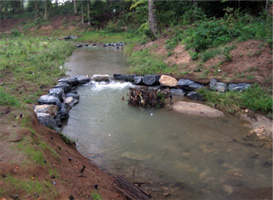 The project will reduce stream bank erosion, improve water quality, and restore aquatic habitat. Estimates show that this stream project will help reduce total suspended solids (TSS) in Watts Branch by 51,000lbs/yr, nitrogen (N) by 400lbs/yr, and phosphorous (P) by 70lbs/yr. Through the aforementioned water quality improvements coupled with in-stream structures and an improved riparian corridor DDOE anticipates an improvement in aquatic species over the ensuing years. In the years to come DDOE will be actively monitoring the stream to look for an increase in macro-invertebrates, improvements in water quality, and changes in geomorphology.

Stream restoration is one part of a multi-agency, collaborative effort to improve water quality of the Watts Branch watershed and the Anacostia River. Other projects include rehabilitating sanitary sewers, constructing stormwater management facilities, and reducing the amount of stormwater runoff from impervious areas.

This project began in February 2014 and was completed in October of 2014.  The goal of the effort was to daylight a 1,600 foot portion of Broad Branch, a tributary to Rock Creek in Northwest DC. Daylighting a stream is the act of restoring to the open air some or all of the flow of a previously covered creek, or stormwater drainage.  Daylighting this section of the Rock Creek watershed will improve water quality at the location and downstream water quality by exposing water to sunlight, air, soil, and vegetation, all of which help process and remove pollutants. Furthermore its restoration reduces nutrient and sediment pollution from erosion caused by fast flowing stormwater by creating meanders and floodplain wetlands which will have wider cross-section and a greater channel depth than the pipe it will replace. Additional surface flow from adjacent streets and rooftops was directed to the area by creating curb cuts and redirecting storm sewers to area further slowing, cooling, and filtering stormwater in the subwatershed.

There were four governmental agencies involved in this project, the Department of the Environment (DDOE), the Department of Transportation (DDOT), the District of Columbia Water and Sewer Authority (DC WASA), and the National Park Service (NPS). 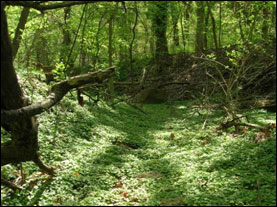 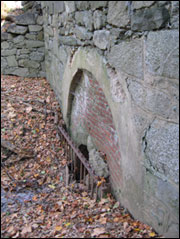 The old channel can be still be seen even though the source of the stream was diverted in the 1930’s.

Located in southeast Washington, DC, Pope Branch is a 1.6-mile first-order tributary of the Anacostia River.  The entire stream lies within DC city boundaries.  The primary land uses of the 250-acre watershed are parkland and residential lands.  Pope Branch is listed on the 303-D List for bacteria, organics, and metals. The primary sources of pollutants are stormwater runoff from yards, streets, and parking lots as well as an aging sanitary sewer that runs along the stream. 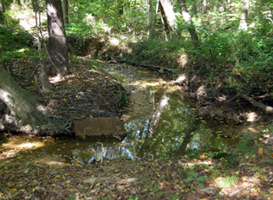 This project has multiple components, all of which will work toward improving the water quality of Pope Branch.  DDOE, DCWASA, and the District Department of Parks and Recreation have partnered on a stream restoration and sewer replacement project in the Pope Branch tributary of the Anacostia River. Located in Southeast, Pope Branch parallels Massachusetts Ave. and Pennsylvania Ave. SE and lies in a watershed that is predominantly single family homes. Due to high volume and velocity stormwater flow that enter the stream substantial back erosion has compromised the stream banks and has exposed the sewer line in several areas. Additionally, DDOE has funded the construction of several LID storm water retrofits to begin addressing the issue of untreated storm water runoff in this subwatershed.   DDOE has worked with a small citizens group, the Pope Branch Alliance to help organize of neighborhood activities such as trash clean ups.

Flowing sewer line work which will bury the sewer line deeper under the existing stream the stream itself will be restored using base flow channel design. After years of the stream incising and becoming disconnected from its natural floodplain will be reconnected to its floodplain which will help dissipate the energy of water in the stream by allowing it to spread out into the floodplain. A series of weirs and steps pools will also help reduce the in-stream erosive forces while also creating areas for increased habitat. The project will create a healthy floodplain forest.

Nash Run:
Nash Run is located in northeast Washington, DC, and is a first-order tributary of the Anacostia River.  The headwaters of the stream are located in Prince George’s County, Maryland, but 75% of the watershed is within the borders of the District.  The stream is piped beginning in Prince George’s County and outfalls east of Kenilworth Avenue in North East DC.  The Nash Run sewer shed encompasses a 229-acre area in the District, 112 acres (49%) of which is impervious. The stream has an estimated normal flow of two cubic feet per second. 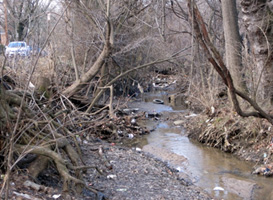 The heavily urbanized character of the Nash Run watershed, and its consequent imperviousness, result in flashy and intense stream flows, even during the most moderate of storms.  Considerable amounts of trash and debris wash out of the storm sewer system during rain events, choking portions of the stream and causing areas for ponding and mosquito breeding.  The resulting hydrologic alterations have deteriorated the water quality of Nash Run and degraded natural habitat downstream of the outfall.  A study on trash in the Anacostia River estimated that Nash Run produces approximately 3% of the total trash from the District that washes into the Anacostia River.  Beginning in 2011, DDOE will fund the design of a system to capture trash and sediment at the end of the storm sewer system as well as the restoration designs for an 800-foot section of the stream valley using natural channel stream design techniques.  DDOE plans to implement these designs in 2013.

Installing the end of pipe BMP coupled with stream restoration at Nash Run will improve water quality in the stream, improve the general appearance of the stream, reduce sediment and floatable pollution, and will improve conditions for terrestrial and aquatic life along the stream corridor. Once work is finally complete the stream will not only be an environmental improvement but will also be an aesthetic asset for the community that surrounds Nash Run.

Springhouse Run Stream Restoration:
Springhouse Run is a remnant of one of the original tributaries to Hickey Run, a tributary of the Anacostia River, with a drainage area of approximately 100 acres.  The majority of the tributary is stable, although it is highly altered and armored in most areas.  The armoring has resulted in a stream with poor habitat value and very limited ability to trap sediment and uptake nutrients. 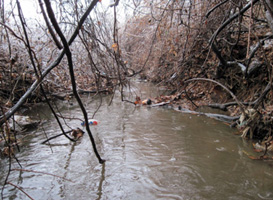 The Watershed Protection Division is coordinating the design of a stream and habitat restoration for Springhouse Run.  The stream will be reconnected to its historic floodplain and its sinuosity will be restored.  This project reach measures approximately 1,600 feet in length and lies entirely within the U.S. National Arboretum.  DDOE is partnering with the U.S. Department of Agriculture, Agricultural Research Service, which owns Arboretum, to complete this project.