Kingman Lake Wetland Restoration:
This project was completed in 2000 in partnership with the US Army Corps of Engineers (USACE). The goal of this project was to restore over 40 acres of freshwater tidal wetlands in the Kingman Lake area in order to increase plant and animal diversity and improve the filtering capacity of the Anacostia.

Monitoring was conducted by the United States Geological Survey (USGS) for five years and was analyzed in the context of other wetlands that have been restored in Kenilworth Park. Funding for this project was cost shared by the USACE and DDOE. 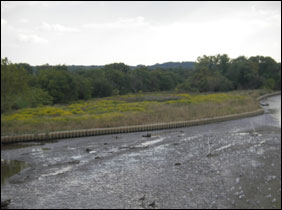 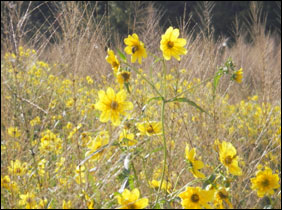 The goal of this project was to restore 17 acres of freshwater tidal wetlands along the shores of the Anacostia River adjacent to Kingman Island. As with the Kingman Lake wetlands, these wetlands will increase the number of beneficial plants and fish in the river and will improve water quality of the Anacostia River. Construction was completed in the fall of 2003. Monitoring is being conducted by DDOE and USGS and will continue for a total of five years. The funding for this project was cost shared by the USACE and DDOE.

This picture of the river fringe project was taken from the Benning Road Bridge. The yellow flower is the prolific Bidens laevis. 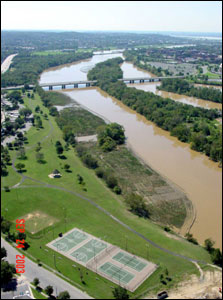 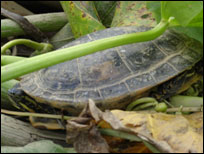 These pictures of the River Fringe wetlands shortly after planting.
Turtles and wading birds are already using the wetlands for habitat. 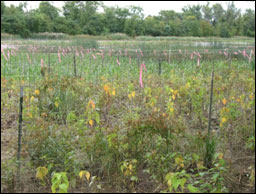 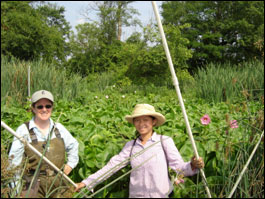 The goal of this project was to create six acres of high to mid freshwater marsh in Kingman Lake. The species of plants planted included a high percentage of shrubs such as Button Bush (Cephalanthus occidentalis), Swamp rose (Rosa palustris), Marsh mallow (Hibiscus moscheutos) and other mid marsh species that are generally non palatable to the high number of exotic, non-native resident Canada geese that reside in the area. An additional goal of this project was to create tidal guts adjacent to the wetland cells for fish and non-motorized water craft passage. This project was completed in 2006 and funding was shared by DDOE and USACE. Monitoring is being conducted by DDOE and USGS.

The Heritage wetland project about 2 months after planting. RFK stadium is in the background.