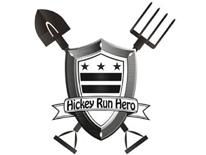 The Hickey Run watershed is an area covering about 2 square miles of northeast Washington DC. Today only a one-mile stretch of stream remains with one tributary named Springhouse Run. It includes the neighborhoods of Langdon, Arboretum, South Woodridge, West Fort Lincoln, South Brookland, Mt. Olivet, Brentwood, and Gateway. All of the stormwater that falls in the watershed’s neighborhoods drains into Hickey Run. It is one of many streams that drain into the Anacostia River, which makes up part of the larger Chesapeake Bay watershed. 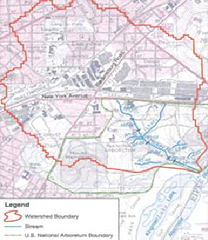 During the Civil War Era, Hickey Run was a vibrant watershed with over five miles of streams and 15 tributaries. Residential and industrial growth led to putting streams in pipes across the District, including Hickey Run’s streams and tributaries that now flow underground.

Today, only a small portion of the stream is naturalized, or above ground, and is located in the U.S. National Arboretum. Over the last 30 years, the impervious area of the watershed has increased dramatically, contributing to erosion and pollution in the stream. Furthermore, dense industrial and residential activity has harmed the watershed.

In 2010, the Department of Energy and Environment (DOEE) began exploring the restoration of Spring House Run. To complement this restoration effort, DOEE is rallying the community. Some low-cost measures by homeowners, such as installing a rain barrel or planting a tree, have the potential to significantly improve water quality. By taking advantage of the incentives and offers via DOEE’s RiverSmart Homes program, the watershed’s residents can be heroes in the effort to restore Hickey Run.

What DOEE is doing about it?

DOEE is working to reduce stormwater runoff in Hickey Run through public education on how the stream is affected by stormwater issues as well as ways they can help their properties. DOEE’s goal is to have 25 percent of the households in the Hickey Run watershed participating in the RiverSmart Homes program (approximately 385 households). As of the end of 2014, 200 houses have participated.

In addition, DOEE is planning other restoration projects in the watershed. DOEE has inspectors working with businesses to prevent pollution and responding to contamination issues should they arise.  DOEE has installed a large filtration device under New York Avenue NE to help minimize trash and sediment that flows downstream and watershed implementation plans and Total Maximum Daily Loads (TMDLs) have been developed to address further degradation of the watershed.

The RiverSmart Homes  program is a District-wide program that offers incentives to homeowners interested in reducing stormwater runoff from their properties. Homeowners receive up to $1,600 to adopt one or more of the following landscape enhancements:

If you would like to join the 200+ participating residents of Hickey Run and become a Hickey Run Hero, please sign up today.

In 2014, DOEE hosted the Hickey Run Neighborhood Challenge by encouraging watershed residents to participate in RiverSmart Homes on their block (see map). The winner was determined in December 2015 by tracking the block with the most participating RiverSmart Homes (with at least two installations). As a prize, the winning block will receive a “green block makeover.”

DOEE would like to congratulate the 2000th Block of Hamlin Street NE for having the following:

What you can do about it?

In addition to participating in RiverSmart Homes, there are many ways that citizens can become more involved in creating a healthy watershed.

Currently, DOEE is working to secure a designer for the project and will be informing the winning block as soon as this is complete to help envision the project.